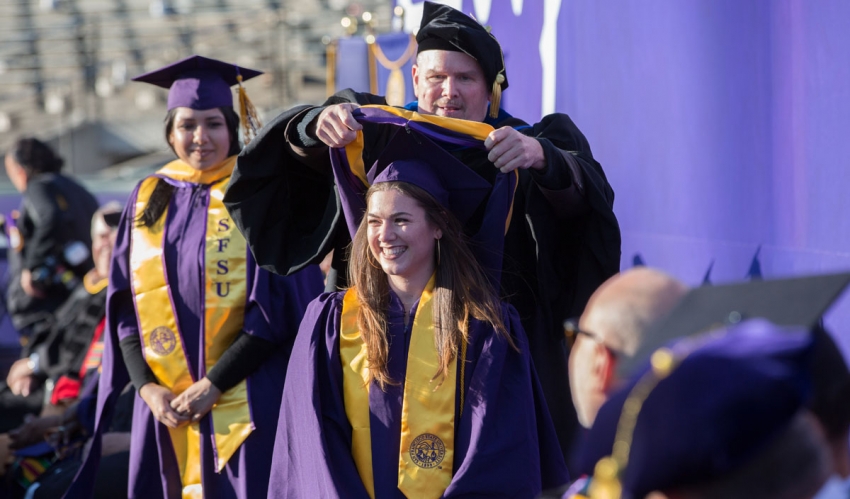 More than 5,000 San Francisco State University graduates experienced one of life’s most memorable milestones during the University’s 116th Commencement ceremony on Thursday, May 25. And 12 of those graduates were on stage at AT&T Park to represent their fellow students in the Class of 2017.

As part of a longstanding tradition, each of the University's six academic colleges selects two students – one undergraduate and one graduate – for the honor of representing their fellow students during the ceremony by wearing their college's academic hood.

Two of those 12 students, one undergraduate and one graduate, are chosen to offer greetings on behalf of their fellow students during the Commencement ceremony. This year the student speakers were undergraduate Talia Hart, a College of Science & Engineering graduate who is heading to Harvard to pursue a Ph.D. in biology, and graduate student Alicia Garza, College of Ethnic Studies, one of the co-founders of Black Lives Matter.

Talia Hart wasn’t sure she’d pursue a degree in the sciences when she came to SF State as a freshman. In fact, her major during her first year was communications because she wasn’t sure she wanted to spend all of her time inside a lab. “I’m meant to be out talking to people and communicating, not really understanding then that science can offer both.”

She took “Biology 100: Human Biology,” a class for non-science majors in her second semester and that’s when things clicked for her. “The human bio class was very relatable. You’re learning about your own body and you’re learning why it functions the way it does,” she said. She said she was thoroughly captivated by the subject, and is graduating with a bachelor of science degree in biology.

She applied to the Maximizing Access to Research Careers program (MARC), which helps supports underrepresented minority undergraduates in biomedical science and prepares them for Ph.D. programs. While in the program she became an active member of the Society for Advancing of Chicano and Native Americans in Science and worked to get other minorities interested in science.

Hart plans to continue studying biology in a Ph.D. program at Harvard University beginning this fall. She also hopes to spread her love of science to her new community in Boston.

Maryam Khan became fascinated with structural engineering by looking at the huge skyscrapers in downtown San Francisco. While studying for a master’s degree in structural and earthquake engineering, she learned how to design a resilient structure to last through a large magnitude earthquake.

As a grad student, Khan worked as a research assistant in the Structural Lab for Multi-Hazard Mitigation; helped with STEM (science, technology, engineering and mathematics) workshops for visiting K-12 students and with outreach events for campus recruiting; and mentored sophomore-level community college students by introducing them to graduate-level research projects.

Khan is interested in encouraging girls and other young women to enter the STEM fields. In many of her engineering courses, she often looked around and realized that there were only one or two other women in the classroom. “I’ve always had a fascination with science, so that might have been my pull toward it. But when I was a girl, I never thought about engineering.”